You are here: Home / Happiness / The Happiest Country in the World This Year is…

It’s that time again — International Day of Happiness and the anticipated release of the 2019 World Happiness Report. Are you as pumped as we are? Okay, maybe you haven’t been ticking the days off the calendar, but you still might be interested in what is the happiest country in the world, what this year’s report tells us about joy around the globe, and whether the US stepped up (or down) their happiness game.

So let’s get right to it.

The Happiest Country in the World Is… Alright, we won’t keep you waiting for this one. According to the 2019 World Happiness Report, the happiest country in the world is Finland. And yes, if you were paying attention, they topped the list last year as well. Coming behind them in the next four spots were Denmark in second, Norway in third, Iceland in fourth, and the Netherlands in fifth.

Want more? Here are the top 10 happiest countries in the world this year:

Two things jump out to us from this list: 1. They’re doing something right in Scandinavia and 2. Where is the US?

Where Does the US Fall on the List — and Why? The US fell one spot from position 18 to position 19, continuing a downward trend in overall happiness here on home turf.

This year, authors of the report point to some different potential reasons that Americans’ happiness keeps tanking—one is how we’re spending our free time. And that answer is on screens, so many screens. You’re on one now. (Oops.)

We’re spending more time on screens and less time face-to-face and doing things that aren’t screen-heavy like reading, going to church, and sleeping. (And we all know just how important sleep is to pretty much, well, everything.) The report specifically looked at the adolescent population but pointed out that the trend seems to hold across generations, so no, we’re not off the hook either.

All of this screen time is making us less happy, according to studies. For example, teen depression increased after smartphones were introduced, suggesting that digital media and well-being are related, at least partially causally. So what can the happiest country in the world teach us? A lot, actually.

Similarly to last year’s report, Finland and other Scandinavian countries scored highly in areas such as trusting their government, having freedom to live as they please, and forming strong social ties with their communities.

All of these factors are connected to overall well-being, and they might give us further insights into why the US keeps falling in rank, especially with government distrust on the rise. Oh and that whole spending too much time on screens thing. Again.

Other Insights from the 2019 World Happiness Report The report presents a number of factors that influence population-level happiness from the importance of government to the benefits of giving to others. It even discusses how happiness affects voting behavior. We won’t get into all of those things here, but we will share just a few things that hit home with us this year.

If you want all of the details, read the full, 136-page report. And then give yourself a huge high five.

Here are our top takeaways: Caveat: This isn’t a causal relationship, but there is evidence that suggests that giving your time and/or money can increase your overall well-being.

The report pointed out three different factors that can boost your happiness when it comes to giving to others: …and they’re more likely to vote for incumbents, according to the report.

Another interesting insight on voting behavior? Authoritarian and populist politicians may be profiting from targeting unhappy people.

3. Addiction is costing Americans a lot, including happiness In addition to spending more time on screens and less time with other people, the report included a special chapter dedicated to the relationship between addiction and happiness in the US. With declining life expectancies despite wealth, addiction is on the rise as happiness levels decline.

The authors point out connections between addiction and corresponding mental health issues, economic inequality, poor regulation of substances, and lack of mental health resources as contributing to the decline in well-being in the US. Ultimately, your happiness starts with you. Work on building and maintaining strong connections with the people around you. Get off your screens more often and into the world. Have conversations with loved ones about mental health and check in with your own. Give more of your time and money, if you have it, to causes you believe in and communities you care about.

We’re all in this together, after all, so let’s do what we can with what we have.

Is the happiest country in the world what you expected? Share your insights from the World Happiness Report, and your own happiness, in the comments.

Want more? Check out some of our posts on increasing connections and other science-backed happiness tips. 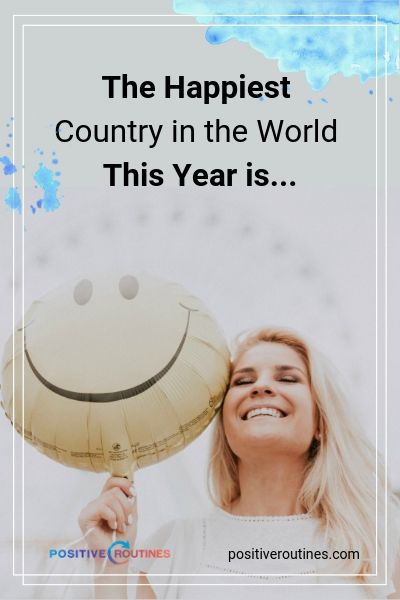