You are here: Home / Productivity / What Are Binaural Beats + Can They Boost Productivity?

So the title piqued your interest and now you’re wondering: Just what are binaural beats, and what can they do for you?

You might say that binaural beats are a type of sound therapy. Anyone can listen to binaural beats tracks, and many of them are freely available on the internet. Listening to them is said to invoke brain states that help with anxiety, mood, focus, and more.

But do binaural beats actually work? And what does science say? Let’s explore how these sounds are created, what binaural beats are used for, their benefits, how to use binaural beats for your productivity, and my own experiment trying them. The only caveat? The science on this stuff is new, so we’ll do our best to capture what’s out there and also be transparent about what we don’t know yet.

What Are Binaural Beats? So what are binaural beats exactly? Binaural beats don’t actually exist in music or audio tracks. The weird (and cool) thing about them is that they’re all in your head.

Confused? Okay, let’s back up for a second and explain what we mean.

To experience binaural beats, you need a set of headphones and a specially-designed audio track. The track will have two tones of different sound frequencies—one tone sent to your left ear, and the other to your right. Your brain interprets those two frequencies plus a third one: the mathematical difference between the two.

Let’s say your left ear hears a 200 Hz frequency while the right ear simultaneously hears a 205 Hz frequency. That difference of 5 Hz will be heard by you as a third sound—a binaural beat. Pretty cool, huh? It’s like one of those wild optical illusions but for your ears.

This phenomenon was actually discovered all the way back in 1839 by a Prussian physicist named Heinrich Wilhelm Dove. But since smartphones and Spotify didn’t exist back then they were, unsurprisingly, not widely used.

What Are Binaural Beats Used For Now? So hearing an imaginary sound might be a fun party trick, but what are binaural beats actually used for?  Hint: It’s not about having a dance party in your head. It’s about what binaural beats do to your brain waves.

Here’s a quick breakdown of the known brain frequency bands (and a great explanation of them, according to Scientific American):

After listening to a binaural beat track for around seven minutes or so, the frequency of your brain waves will reportedly start to synchronize with the frequency of the binaural beat (a process called entrainment). In theory, this means you can enter a different mental state by simply popping on your headphones and hitting “play”.

If we take the 5 Hz frequency in our example above, listening would send your brain into a theta state where relaxation, meditation, or sleep would be easier to attain. A binaural beat in the alpha range should help you reach a state of focus or mental flow.

What Science Says About Binaural Beats So the next question is, does it actually work?

The short answer is, maybe. Yeah, we know—not a very satisfying answer (sorry). But let’s get into what we do know.

Study results have been mixed, and there’s still a lot about binaural beats that are not known or not well understood. Outcomes depend largely on how research is conducted, and on whom. To give you an example, age, gender, and even menstrual cycle have all been reported to make a difference in the ability to even perceive binaural beats.

How effective they are may also depend on how you want to use them. If your goal is to be more productive, you might want a binaural beat stimulus that helps you focus, clear your anxiety, or sleep better (because, as we know, sleep is key to productivity).

What are binaural beats doing for your brain? Here are a few ways binaural music is said to supercharge your mind and if the science backs up their claims. Search for binaural beats and you’ll find dozens of tracks that promise to help you focus during work or study. But do they work?

Research on this differs.

It’s possible, though not conclusive, that we need to listen to the beats for longer than two minutes in order to enter that focused state. Perhaps the most promising use of binaural beats so far is for reducing anxiety. Here are some ways the research backs that up.

Note that these studies all used different binaural beat frequencies—some delta and some alpha range—and yet all produced positive results. So it may well be that binaural beats could help you feel less anxious at work, in meetings, or in your personal life (though further testing is needed to say for sure). 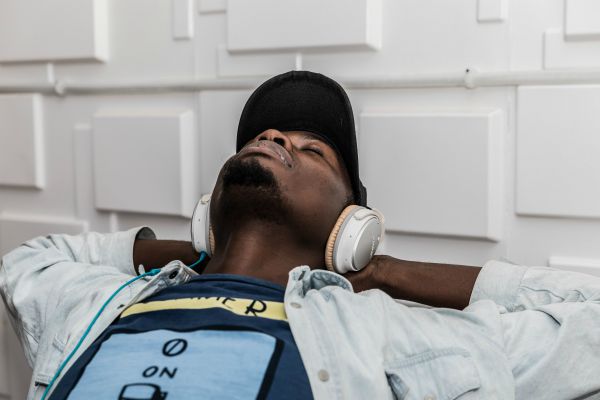 So what about sleep?

One pilot study had elite soccer players listen to binaural beats in the delta/theta range at night for eight weeks. It found that “subjective ratings of sleep and awakening quality, sleepiness and motivational state were significantly improved” in the group that listened to the soundtrack.

Most recently a 2018 study found that a delta-frequency binaural beat track could affect sleep stages. Subjects who were played the track entered into stage three sleep more quickly and stayed in it longer. This stage, known as slow-wave or delta sleep, is the deepest and most regenerative state of sleep.

Then there’s Seth Horowitz, a former neuroscientist at NASA who started out researching how to make sleep easier for astronauts. He used technology from NASA to create a sound-therapy app designed to induce sleep. Called Sleep Genius, it incorporates binaural beats alongside other tech. Compared to a control group, Horowitz and team reported that 77–80 percent of those who used the audio program were sleeping better at night.

Other uses for binaural beats

Okay, so there’s focus, anxiety, and sleep. What are binaural beats used for in addition to those?

In short, there’s plenty of research to show that binaural beats have promise as a tool for productivity and well-being.

But there’s also a lot left to learn: There’s no consensus on which frequencies are best, how they should be delivered (e.g., with which carrier frequencies, if music is included, with background white noise, etc), how long they should be listened to, when, or by whom.

So far the research can really only guide you on what to try, so you can then see if it works for you.

Tips on how to use binaural beats

If you want to try it out for yourself, here are few tips to up your chances of a binaural boost. If you listen through a speaker, you’re not actually getting the binaural effect. That’s because the frequencies are combined into one sound before they reach your ears, producing a monaural tone.

For it to be binaural, you need headphones to separate the frequencies into each ear.

There are dedicated playlists on Spotify for binaural beats, but just be warned that the tracks are a little short. (I struggled to get immersed in them.) Hour-plus videos on YouTube worked best for me.

You could also try downloading a binaural beats app, like Binaural, that has different tracks for different situations. Remember that different frequencies will produce different results, so the key here is to experiment. Consider yourself an experiment of one. Record the tracks you’re playing, the work you’re doing, and what happens as a result. This way, you’ll have a better sense of where to turn the next time you want to up your productivity.

My experience with binaural beats

I couldn’t close out the article without giving you a firsthand look at how binaural beats work for a real live person—i.e., me. Here’s my experience with using binaural beats.

I was having one of those unproductive work days where my thoughts were dispersed between topics like stardust through space (only not as pretty). Everything was a distraction. Snacks. Facebook. My bed calling me siren-like to jump ship and go take a nap.

I found a binaural beats track in the mid-beta range aimed at generating a focused state. I used this one.

After just 10 minutes it hit me that I was actually in a deep state of concentration. Listening to the track, I was able to maintain a flow state for the next 40 minutes or so. This was surprising, given the day’s history.

Since I’m not one to listen to music while I work (I find it distracting), wearing headphones while writing was new to me. It definitely had the added benefit of blocking out the extraneous noise of cars and my upstairs neighbor’s screaming children.

I’ve now tested focus tracks several times and so far they do seem to work for me. Will I listen to them all the time? No—I still enjoy silence while I work. But I will keep them handy for when I’m having trouble focusing. I’ll also happily experiment with tracks for anxiety, meditation, and sleep when the situations arise.

To sum it all up So what are binaural beats? They’re a tool that might help you find a little focus, create calm, ease into sleep, or just tap into a state of flow. Or so they say. While there’s still a long way to go before science has definitive answers on them, there’s no harm trying out a few binaural beats playlists or tracks to see if they work for you.

After all, your productivity toolkit could use a few secret weapons, and it’s worth it to see if binaural beats do the trick.

Here are our key takeaways:

Your turn: Have you tried binaural music yet? What are binaural beats helping you achieve? Please share your experiences in the comments.

If you’re into productivity tips, check out our article on one of the best ways to boost your productive now.